If you’re nuts about coconuts…

get your hands on the Odiris…

the greatest grater of them all! 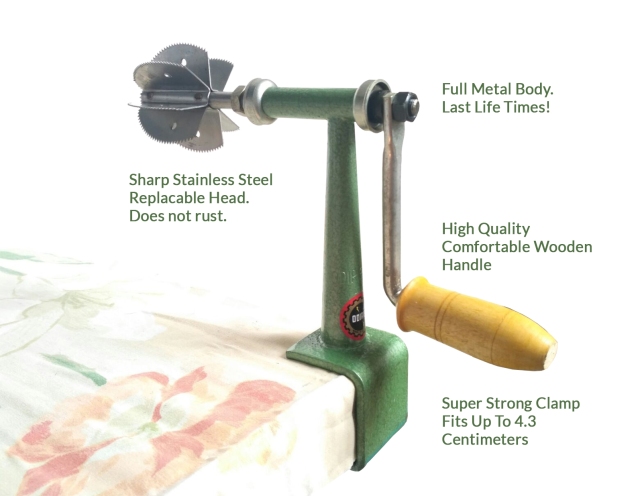 Some decisions are difficult; others are easy.

This one is as easy as it gets… if you eat freshly-grated coconut, click here.

The miracle you’re about to connect with is the Odiris A8.

And, you should buy one.

You’ll be very happy together.

Technically, you can call the Odiris A8 ‘a coconut grater’ – but that would be like describing the Taj Mahal as ‘a building’ or the Mona Lisa ‘a painting’.

The Odiris A8 is THE coconut grater.

It belongs to that elite group of objects… the spoon, scissors, the hammer, the wheel… which once invented, cannot be improved.

“You cannot make a spoon that is better than a spoon,” said Umberto Eco. He could say the same about the Odiris A8. 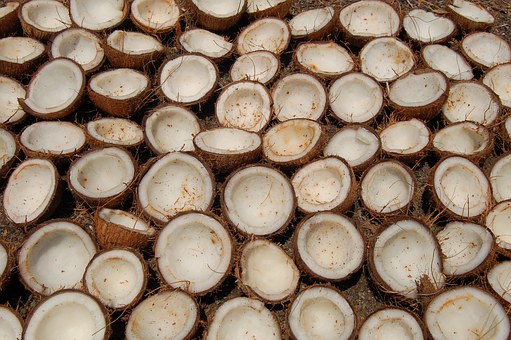 It is 4pm on a hot, sultry afternoon in Ernakulam – and things are not going according to plan.  Situated a short ferry-ride from the historic city of Kochi, Ernakulam is the commercial hub for the state of Kerala. It has a bustling port, hundreds of restaurants, acres of markets – and it’s here that I’ll find the coconut grater that’s eluded me for a decade.

Because this is the land of the coconut – quite literally. 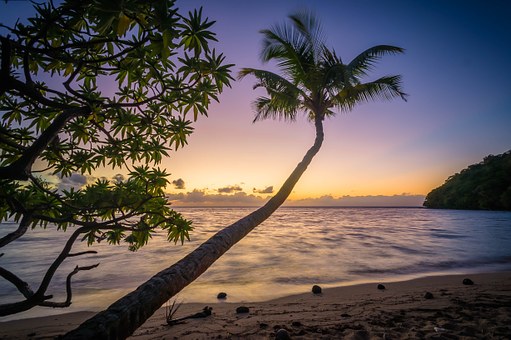 In the local language, Malayalam – ‘Kera’ means coconut and ‘Alam’ means land – making Kerala the physical and spiritual home of the coconut. There are hard numbers to back up the claim. Of the staggering 11 million tonnes of coconuts harvested in India each year, 45% are grown in Kerala. If you’re eating a dish in India with coconut, there’s nearly a 50/50 chance it came from Kerala – via Ernakulam.

So, during my month of travels across India, I haven’t even asked to buy a coconut grater in any other city – because I’m headed for Ernakulam, global capital of the coco’. I know this place will have what I’m looking for.

I am in my sixth or seventh hardware shop, and a pattern is emerging. I’ll talk to the owner/manager – a large man in his forties of fifties, sitting at a tiny desk at the front of the shop – and ask him if he has a coconut grater. He nods, calls a younger man, and asks him in Malayalam to bring something from the depths of the shop. I wait excitedly – and one of two disappointments plays out.

Disappointment A: the younger guy comes back with a promising package about a foot high. It starts well as he unpacks the base (a wrought-iron worktop clamp) but then things go pear-shaped as he shows me the business end: a static, forked blade. Basically, this grater is a knife on an adjustable  stick. I know from bitter experience that this won’t work. The essence of coconut grating is circular motion – and I mime this to the team. They send to the next shop.

Disappointment B: the younger guy comes from depths of the shop with a smaller package, and I know before he opens it, what it will be. It’s the rotating grater reviewed in 2017 by the Guardian’s Rhik Samadder that secures to the worktop by a suction pad. Let me be clear: Rhik is a professional reviewer of kitchen gadgetry – and he knows his onions. But Rhik, on this occasion… I humbly beg to differ. I’ve owned and used this model (which dominates the online market, and is sold right across India) and it doesn’t cut the mustard. First, the central crank soon develops a wobble – which you need to fix with a handful of extra washers. Once you’ve done this, you’re into a slow, inevitable death spiral with the suction pad. It will fail you – it’s just a question of when. And when it does, you’re left with a grater that skates around the kitchen like Robin Cousins.

And so it goes. I drag myself through the bustling streets of Ernakulam – and no one can sell me the coconut grater I have in my head. Over two hours, I’ve visited every hardware and metal shop in the coconut capital of the world, and I’m going home empty-handed.

I know what I want – but it doesn’t exist here.

Back in the 1950s, somewhere in Sri Lanka, another man was going through his own coco’ crisis.

Odiris Perera was looking at holy trinity of kitchen tools used by every housewife in Sri Lanka – the chilli grinding stone, pestle and mortar and coconut scraper – and he knew the scraper didn’t cut it. 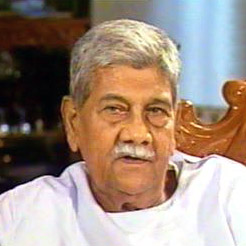 Almost every Sri Lanka meal uses ground coconut, and for centuries the white flesh has been gouged from the shell by static metal scrapers. It’s messy, fiddly, time-consuming stuff – taking way longer than it should. The process almost puts you off coconuts altogether. I own an antique brass coconut scraper – and while I treasure it as an object, it’s defined by the word ‘pretty’. Very pretty to look at; pretty useless at what it does.

Odiris Perera took the problem by the scruff of the neck, and in 1952 this 38 year-old railway engineer experienced his coco-eureka moment. He knew the solution called for a rotating head, combined with the stability of a screw clamp. Add in world-class engineering – stainless steel blades, cast-iron body, sealed-system bearings – and you have the ultimate coconut scraping machine.

He gave the product his own name.

Sri Lanka knows a good thing when it sees it, and the Odiris-branded scraper sold from the moment it was launched.

Then, in 1959, things went viral. To quote The Nation newspaper: “[Odiris Perera] owned a small Fiat car and while participating in a motor car parade, he fitted a table onto his car and got two beautiful damsels to demonstrate coconut scraping with his machine… the following day, the picture of his car and the coconut scraping was flashed in all the newspapers in their front pages”

Odiris Perera went onto a fabulous career – not just redefining the scraper but also designing a range of breakthrough kitchen tools. In 1998, he launched a revolutionary, self-dousing kerosene lamp – giving a safe light-source to the millions of people in Asia without access to electricity. “This lamp costs only Rs 20 [20p],” said Perera, “and it was not invented with the intention of selling commercially. It was made with the purpose of giving it to the poor.”

In 2007, at the age of 94, Odiris Perera passed away – leaving a thriving pan-Asian business. To this day, he is still celebrated in Sri Lankan media as the leading entrepreneur of the post-colonial era.

Back in the UK, after my travels, I was determined not to give up. I knew my scraper was out there – somewhere.

Googling time and again with the properties I was looking for (circular action/ screw base) I finally came to the site for the Odiris Engineering Company Ltd. And there… on the homepage… it was! The machine I’d wanted, for a decade.

Just below the image of the Odiris A8 was the name and address of the EU distributor: Nishan Enterprises. I called the mobile number listed, and on the third ring spoke to the charming Nishantha Udeni. “Yes”, said Nishantha, he could send me a sample Odiris A8 to review. “Yes”, he could set up an Amazon page to bring the A8 to the UK. “And yes”, I could work on a piece with his son Pawan which would celebrate the legacy of Odiris Perera.

For me, every part of this journey has been a privilege.

So what will happen when you get your shiny new Odiris A8 though the post – and you become one of the first people in the UK to own one?

First, you will appreciate the sheer beauty of the thing – the quality of the green glaze of the metal-work, the satisfying weight and heft in your hand.

You will clamp it to a worktop (almost any surface, up to about two inches thick). Your Odiris is now as solid as a rock.

You will split your coconut with a hammer (I put mine on the floor, and strike the middle; two or three blows usually does it). 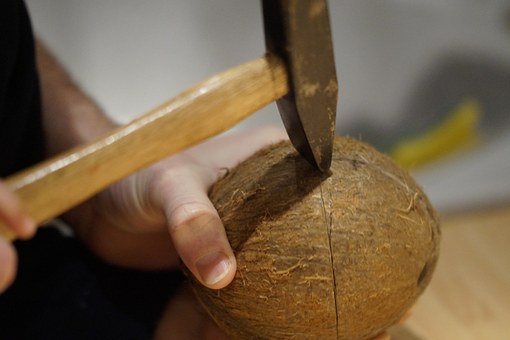 You will offer up one the freshly-split hemispheres to the scraper, and turn the handle. Soft coconut flesh will meet the Odiris – in an effortless, irresistible union – yielding a bowl of soft, white flakes.

Contemporary press reports from the media spectacular of 1959 don’t tell us exactly how the “two beautiful damsels” demonstrated the Odiris on top of his Fiat – but use the machine once, and you can use your imagination.

And that, I think, is how the coconut itself would want it to be. 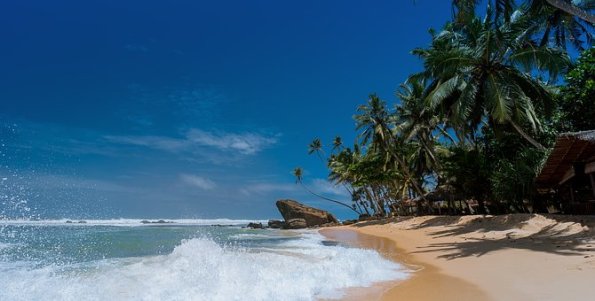 For people in the West, the coconut is the tropical fruit of palms hanging at lazy angles over soft beaches and azure water. For people in East, the coconut tree is the sacred provider of food, firewood and shelter – and its fruit is an auspicious part of every celebration.

The coconut doesn’t want to be a tough nut to crack. It wants to yield to the Odiris.

To the late Mr Odiris Perera: I salute you.

To all future owners of the Odiris A8: happy scraping

This entry was posted in Odiris scraper - the GRATEST. Bookmark the permalink.