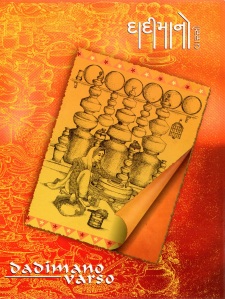 After six years collecting Indian recipe books, I’m lucky enough to have a couple of shelves of volumes at home. As with any collection, I have my favourites: books I cook from time and again. One day, I’ll sit down to think through my personal Top Ten.

But right now, I have a crush on one particular Indian recipe book, and I can’t stop talking about it.

A couple of times recently, I’ve found myself describing the book to friends – and spotting (behind their patient nods) that I’m giving them ‘way too much information’, and that this cookbook might not be up there with Anna Karenina and Don Quixote.

The simple fact though, for me, is that it is.

I’m the first to admit that I ‘have a thing’ about Indian cookbooks.

Time allowing, I spend hours surfing curry blogs, looking for new titles. On the day the new copy arrives in the post, I read it cover to cover like a novel – marking the recipes I’ll cook. After a month or so, and eight to ten meals cooked from the new book – I move on.

Driven by this need for new books, I know exactly what I’m looking for when I surf the masala blogs.

In a word: ‘connections’.

I want a cookbook which connects me to a specific Indian community: to the food that grows around them, to their lifestyle, beliefs, festivals and culture. I want recipes which let me taste all of that – on the end of fork (or, even better, in my fingers).

I’m getting better at finding these books that connect me to Indian communities, and several have blown me away.

But since October 2014, I’ve had a total, headlong curry crush on one book: Dadima No Varso.

I’m guessing you haven’t heard of it.

(I’m also guessing… if you’re still reading… that you might be there with my friends, asking: ‘why’s he STILL banging on about this obscure curry book?’)

In one sentence, Dadima No Varso is a guide to the cooking of the Jain community in the city of Palanpur (in Gujurat, northern India).

With roots dating back to the 6th century BC, Jainism is one of the world’s oldest religions.

And in terms of ‘connecting me with a community’, Dadima No Varso is about as focused as it gets: cataloguing the recipes of one of India’s smallest religions (4 million followers in a population of over one billion), as cooked by the Jain community of one provincial city.

Even before I’d seen the book, I was intrigued by what it might hold.

When I got my copy, it was love at first sight.

Bound in hardback, A4, and almost 500 pages long, Dadima no Varso is a beautiful sight to behold. Set with Gujurati text on each left hand page, and English on the right, it’s a striking mix of the exotic and the familiar. Almost every page has original, hand-drawn illustrations of cooking techniques; every chapter has full page photographs of the raw ingredients and finished dishes. Even the font was specifically designed for the book.

Aesthetically, and in terms of practical use as a cook book – it is close to perfection.

And when you actually come to cook from the book, the results are breath-taking.

Whether you’re pan-frying guavas in dry spices, simmering banana peel to make a chutney or cooking a dal with broad beans – each dish has the hallmark of the purest, lightest cooking.

I could go on… the dals made with bottle gourd and ridge gourd, pan-fried asparagus in spices, drumsticks in besan gravy… all giddyingly delicious, and all delivering the same gravity-defying lightness of touch.

Given the heritage of Jain recipes in the history of Indian cooking (the first ever reference to the poppadum can be found in a 5th century BC Jain text) maybe we shouldn’t be surprised by the heights the cooking reaches.

But there are surprises beyond the recipes.

Cook your way happily through this book (as I have) and on page 406 you flip past the last dish – and come to a summary of the Jain belief which inspires the whole book.

‘The Jain ethos states: Ahimsa is Live and Let Live.’

As a religion with two millennia of history, Jainism is massively rich in literature and traditions.

To condense that theology into exactly 150 words, on half a page, is (for me) a masterpiece of brevity and humility.

I’m not going to pretend to know more about Jainism than I do. I know that the religion is committed to non-violence, to respecting the opinions of others and to self-control. In today’s borderless world, these strike me as very practical virtues.

And because this is a food blog, I’ll mention that the Jain commitment to respecting life not only embraces a vegan approach to cooking – but extends to respecting all living organisms (which would be killed if harvested).

This includes – maybe problematically for some Western readers – avoiding all root vegetables as food.

I’ve been cooking with the book for months, and had to scan the recipes as I wrote this. Fact: not a root vegetable used in the book. And for a curryphile who’s weekend invariably starts with peeling onions and garlic for the day’s curry – neither are used anywhere in Dadima No Varso’s Jain cuisine.

Nothing grown in the earth is used in the book.

Am I falling off the edge of the foodie map to wonder if the air-borne ingredients of Jain cooking – leaves, seeds and fruits – have something to do with the weightless feeling of enjoying their cuisine?

Does stuff grown in the ground weigh you down?

What I do know is that every recipe I’ve tried in Dadima No Varso delights, and that the 80 page glossary of conversion charts, cookery terms and helpful tips is the best I’ve seen in any book.

Reading around this piece today, I’ve also learnt that Mahatma Gandhi’s philosophy of non-violence was deeply influenced by Jain thinking – linking the religion to Indian independence, and to one of the defining historical events of the last century.

Without Dadima No Varso, I wouldn’t have made the connection.

The ‘provenance’ of a book is also important, and for my copy, it couldn’t have been richer.

I want to thank my wonderful colleagues in India, who patiently followed the online trail for Dadima No Varso to a Jain community centre in Mumbai – and then presented me with my copy on a recent visit to that city.

“We’re a bit shocked,” said one Mumbai colleague, “to find you cooking recipes from a religion that most British people have never heard of.”

She has a point.

But for all the reasons I’ve tried to list – the sheer deliciousness of the food, the beauty of the book, the definitive pages of helpful tips – Dadima No Varso is in a class of its own.

And in terms of ‘connections’, it’s introduced me to new ingredients, new recipes… and even new insights into one of the world’s oldest religions.

Not bad for a cookbook.

I’d love to share it with as many of you as possible.

The last word, I feel, should go to the authors themselves.

The text below quotes from the preface:

“Over generations, our Jain recipes have developed through innovations and interpretations. Ingredients, method and utensils all have gone through many transformations. The interest in world cuisines has changed the tastes of this generation. Yet, at times one craves for those distinctive flavours, the basic tastes, the sweet aroma, the rich colours and the stimulating textures that go with the everyday modest food of the yesteryears.

“This book has fired us, with an enthusiasm to carefully document a step-by-step description of our traditional recipes, bequeathed from dadimas (grandmothers) to her daughter and granddaughter.

“Time passes by. Combinations from the simple and original recipes bring about different aspects in cooking. Variations, adaptation and fusion are the keys to a creative urge – but the choice is definitely yours.”

This entry was posted in Jain cooking. Bookmark the permalink.

11 Responses to Pure Jainius – recipes from a Jain cookbook